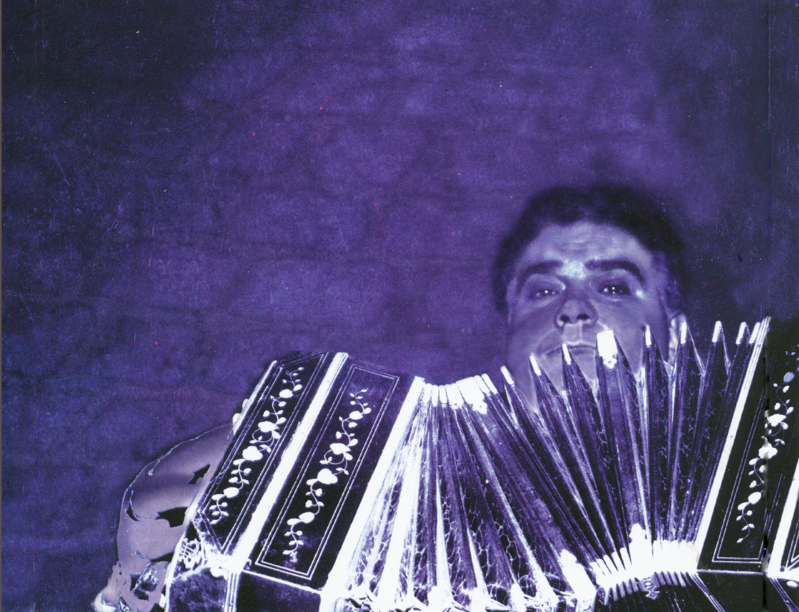 [1925] born on April 30th in Lanús, Province of Buenos Aires [1934] first performance in the Café Germinal (calle Corrientes) with the orchestra of Francisco Alessio [1936] member of the Vicente Fiorentino's band and many other bands [1949] conductor of the orchestra of Alberto Castillo, writing the original arrangement of Pobre mi madre querida. Pedro Aguilar, violinist of the orchestra, became later Rovira's high level teacher.
Rovira also formes part of Roberto Caló's group and founds his own band. [1951-52] works for Radio Splendid [1953-56] He toures through Spain and Portugal with a band and the dance troupe of Alfredo Alaria and the singer Juan Carlos Fabri. [1956-59] Back in Buenos Aires he joins the orchestra of Alfredo Gobbi writing his first famous tango:
EL ENGOBBIAO.
Again an own formation Del Río-Rovira he shares the fame with the singer Alfredo Río recording for the label TK with strings group and as soloist until the singers José Barón and Jorge Hidalgo took his place. [1958] As work is getting rare, Rovira shares also Osvaldo Manzi's orchestra as first bandoneonist. Here he composes his great tango FEBRIL. As a trio with Manzi (piano) and Kicho Díaz (double bass) he accompanies the singer Silvia del Río. he also becomes member of the band of Carlos Figari. [1959] This year he starts his most important step of the career with the Octeto de La Plata conducted by Omar Luppi for them he writes the arrangements. [1961-64] This experience leads him to form the Agrupación de Tango Moderno (octet, later septet), with a first performance on December, 1st at the School of Medicine and recording for the labels Record and Microfón and offers concerts for the Círculo de Amigos del Buen Tango (Circle of Friends of the Good Tango). After that time he playes as soloist in the orchestra of Hécor María Artola [1965] First he joins the cuartet of Reynaldo Nichelle, then he founds a soloist formation where the bandoneon takes a leading role within the group and where Reynaldo Nichelle (violin) is some times replaced by Hugo Baralis, the pianists are Leopoldo Soria, Osvaldo Manzi and Atilio Stampone. Particularly with Nichelle and Stampone they have great success in the difficult time. Then Rovira becomes first bandoneonist of Stampone's orchestra while Nichelle is the violin soloist. They join their musicians to an octet for which Rovira composes the ballet suite Tango Buenos Aires based on poems of Fernando Gibert. His works are also included in various short films and in the show Ciudad Nuestra Buenos Aires also with poems of Fernando Guibert and choreogrphy of Oscar Araiz.


A new trio starts on November 25th 1965 in Gotan (Talcahuano 360) and Tango 66 of the pasaje Seaver and he recorded a LP for the Universidad del Litoral (for more details see the discography) This formation exists until 1970 while making the recording of Sónico using for the first time an electronic amplification for all the envolved instruments resulting in a new sound effect using a special soft pedal for the bandoneon. [1970] He moves to La Plata (Tolosa) as an instrumentalist of the Police Band of the Buenos Aires Province. [1973] During the Campora's gouvernment he becomes Head of the La Plata Teatro Argentino. Here he plays with great skill the bandoneon, piano and english horn. He starts forming a wind orchestra but loosing his audience. His come back is initiated by his long play Que lo Paren' [1980] On July 28th he dies.

Thanks to Osvaldo Pugliese, A Evaristo Carriego

has been widely known.